This article will describe my approach for creating the environment-based lighting and reflections shown in the tweet above. It consists of several parts:

I can't take credit for coming up with this - I was inspired by other similar demos I've seen, such as this video by Bob Burrough. I just want to try to lay out the approach I used (which is likely full of errors or otherwise suboptimal) and explain some of the challenges I encountered.

Streaming video from the webcam

For this demo, I used a 180 degree fisheye lens webcam (not a referral link). I found it to be a bit less than 180 degrees at the edges, but was pretty close to 180 degrees from corner to corner. The wider the angle the better for this demo, but it's okay if you have a more narrow angle too.

Using a set of helping hands from an electronics kit, I positioned the webcam above the Looking Glass. 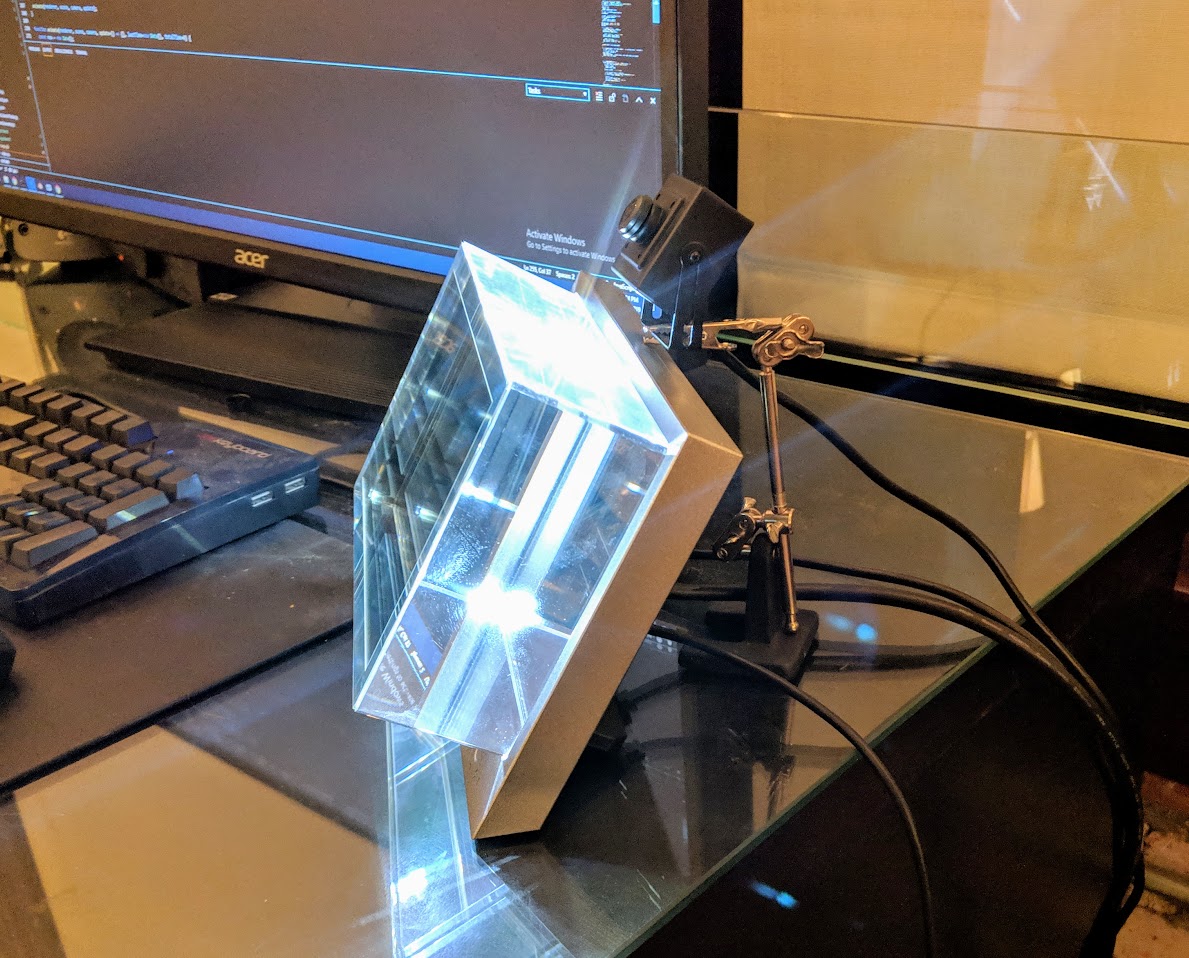 It's easy to access the webcam with HTML5 features. Add a hidden <video> tag somewhere in your html body.

I started by initializing the webcam and attaching the stream to the video element. I used a relatively low resolution (640x480) to prioritize performance.

To get the video stream onto a texture in three.js, I made a THREE.VideoTexture referencing the video element.

Let's build a quick demo to check if the webcam is working.

Looks good so far! However, there's a big problem present in most setups. Webcams will by default try to adjust their gain and white balance depending on the content of the scene, which means that as things move around in front of the camera, the overall view will not be captured with consistent exposure settings.

You can probably live without fixing that for the sake of this article, but for the demo to work properly I needed to be able to have control of these exposure settings. There is no option for this in getUserMedia and no way to modify the resulting video stream in the browser, so I had to look for another way to control this.

I found that by adding a Video Capture Device in OBS, I could use the "Configure Video" button to access a panel that would let me disable automatic white balance and automatic exposure. I adjusted them manually until I reached a combination of settings that worked for my environment. These settings persist after closing the settings panel. 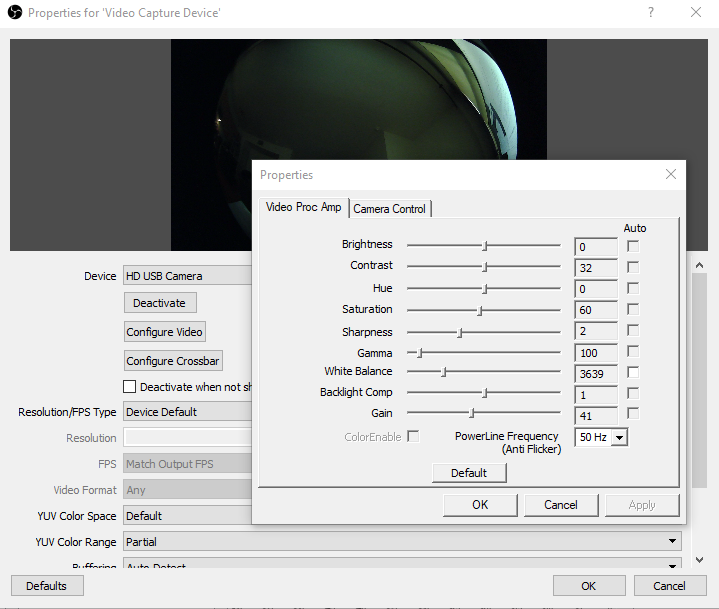 In order to convert view angle to a texture coordinate in the video, I created a fragment shader. This shader is not very physically accurate, it just assumes that the edges of the texture will map roughly to the edges of a hemispheric view looking out from the camera. Of course, a vertex shader is also necessary, but this one just sets the standard vertex positions and normals.

I stored my shaders on script elements somewhere in the DOM and read their contents into a THREE.ShaderMaterial.

These shaders were then applied to a THREE.ShaderMaterial.

Let's build another demo to check if the shader is working.

You'll notice there's some trickery happening here. To account for the limited field of view of the camera, I mirrored the view on the rear side of the sphere. To try to limit how much this distorts reality, I applied an attenuation factor towards the back of the sphere.

If you have a 360 degree camera (likely made from a pair of front + back 180 degree cameras), you can use two textures & use a lookup from the reverse camera when norm.z < 0. You'd omit the attenuation factor in this case.

Create a cubemap for reflections

I created a cubemap by placing some cameras inside the sphere. They look out on the world and see the view as rendered by the shader, and render their views to a set of textures that we can use for reflections. There is a helper class called THREE.CubeCamera that can do this.

This part required two scenes. In one scene, I placed the sphere and CubeCamera. This scene is rendered independently. The second scene used the texture rendered by the first scene as an environment map.

The cubemap resolution does not need to be very high - 128x128 for each face seemed like plenty. Once the cubemap was rendered, I applied it to a THREE.MeshStandardMaterial with a full metallic value and no roughness.

Creating a scene for the cubemap is pretty straightforward.

I then used the cube camera's render target texture as the environment map in a THREE.MeshStandardMaterial.

One thing to remember is that on every frame, the cube camera must be updated.

The cubemap is fine for reflective surfaces, but I wanted to illuminate diffuse surfaces as well. To do that I used THREE.PMREMGenerator. PMREM stands for Prefiltered Mipmap Radiance Environment Map, and is mainly a downsampled version of the environment map that roughly preserves the total radiance of the image. For example, here is one face of the original cubemap and its four downsampled PMREM versions. 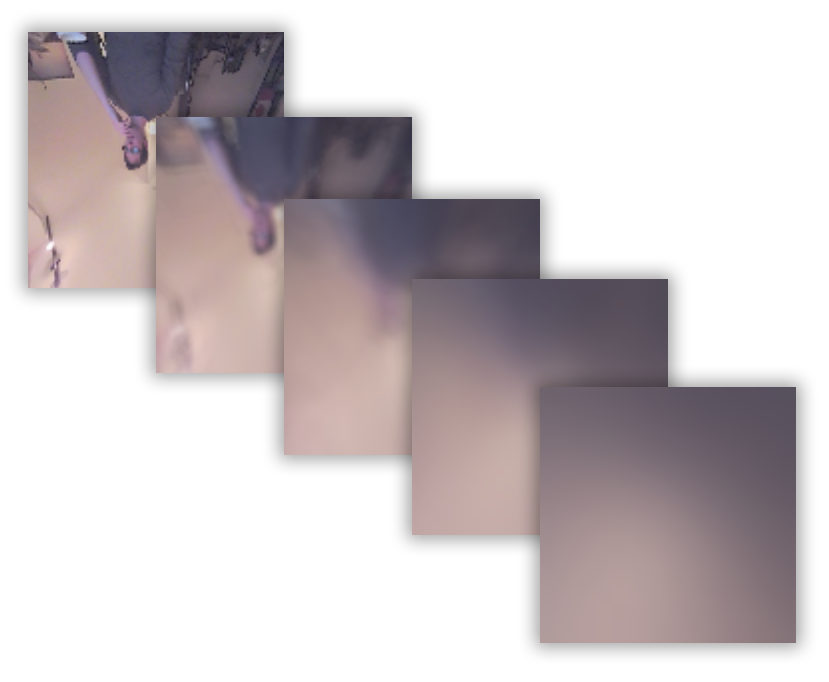 Once the PMREMGenerator has rendered all of the filtering levels of each cube face, it will have rendered dozens of individual render targest. It's not efficient or necessary to use so many individual textures, which is where THREE.PMREMCubeUVPacker comes in. It's used to generate a single texture that can store all the resulting images. 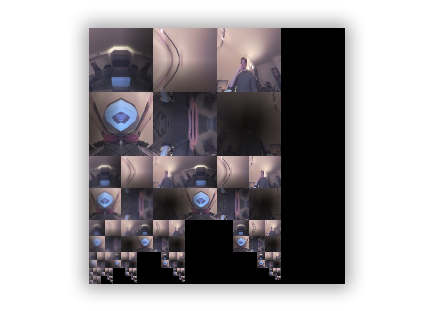 Here's how I created these helpers.

In the non-cubemap scene, the material must also take in the PMREMCubeUVPacker's result.

Since we need this to react in real time, the PMREMGenerator and PMREMCubeUVPacker must be updated on each frame.

The result is that now we can control the relative roughness and "metalness" of the material using information from the real world environment. Try adjusting the relative values of these parameters in the demo below.

Besides putting it on the Looking Glass, that's about it! If you have a Looking Glass display, definitely try the full demo. Thanks for reading. 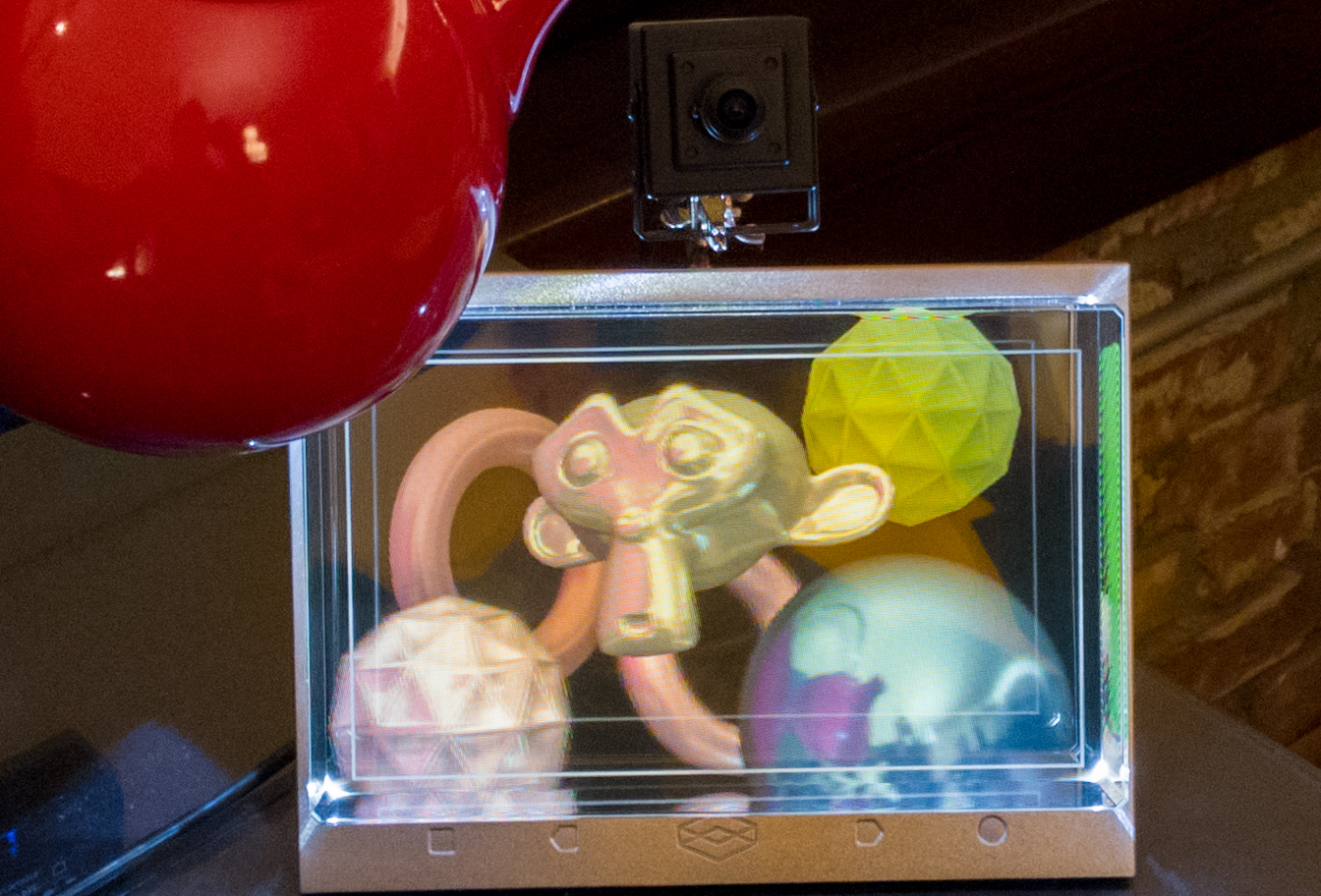 Is any graphics demo complete without a teapot somewhere in the scene?